Slovenian National Committee of the 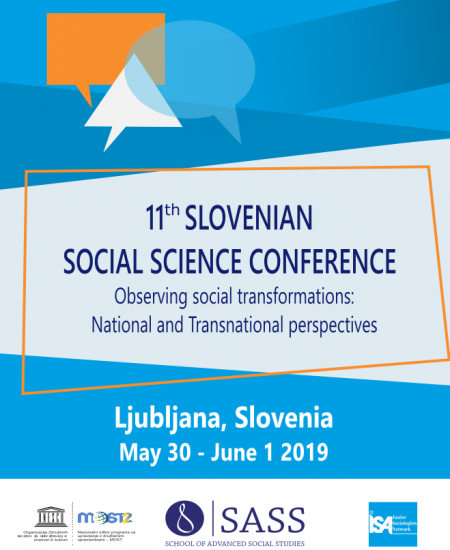 Scope of the Conference:

The social transformations we live in are becoming increasingly dynamic and hard to predict. While accelerated globalisation seems to be an obvious trend in the economic, political and cultural spheres, the future outcomes are far from clear. They do not depend only on the existing structures, processes and potentials but also on how these structures, processes and potentials are observed and perceived by individual and collective social agents. When these agents, through their actions, affect the future of our societies in increasingly morphogenetic terms, they are themselves inevitably affected by their own interpretations of the reality. The perspectives, narratives, semantics, discourses are thus no less important than social structures. The ways, in which transformations are understood, may thus be no less relevant for the future than these transformations themselves.

The global interconnectedness and interdependencies can be seen today as a place of accelerated capitalist market competitions and as an opportunity for alternative globalisations; as a need to move beyond the local perspectives and to re-affirm them; as transcending cultural differences and as re-affirming them, as the beginning of the end for the nation state and as a demonstration of its pervasiveness.

It is the role of social scientists to observe, interpret and evaluate these varieties of perspectives – and to add the perspectives of their own – well supported, of course, by relevant social theories and rigorous empirical observations. Special attention will be devoted to innovative research methods in comparative research, based on the combinations of qualitative, quantitative and mixed research methods.

Based on this, our conference was primarily but not exclusively focus on:

Conference was held at: