Slovenian National Committee of the UNESCO Management of Social Transformations Program (MOST),

„ The Social Transformations We Live in: Between Cohesion and Fragmentation” 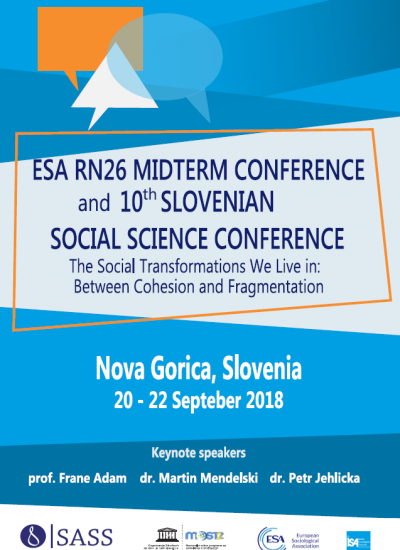 We all are witnessing contradictory and complex tendencies in the world we live in. It is becoming fragmented in many spheres. Simultaneously global marketization, the continuing rise of transnational organisational forms, and super-national political unions suggest unification and homogenization. The global tendencies increasingly make our world interconnected and interdependent. These interdependencies call for the greater coordination, integration and cohesion but they can hardly be taken for granted. At the same time a corporate-driven policy agenda and the distorted economic views bolstering them have deepened inequality and undermined social stability in regions across the world. It was not just the persistent patterns of huge inequalities between different parts of society but also the growing frustration that political systems have become unresponsive to the concerns of people suffering from the current state of affairs.

Do we live in the era that seems to favour exclusion over inclusion? In the time, when the first (exclusion) is fast becoming a routine measure to which mechanically to resort, internal choices assume yet more attraction and facility. It may refer to many aspects of social and political life and rise many questions. The EU has remained suspended between rhetorical commitments to integrate and real world action which demonstrates that politics remains, in the eyes of the large majority, properly within the nation state.  Mass migration and the related cross-cultural encounters can generate productive and mutually beneficial inter-cultural practices; however, they may be exploited to promote segregation, discrimination, fundamentalism, and extremism. Is information and digital revolution in this or other respect a decisive factor for the social integration or new social divide? How people feel solidarity and on what grounds? What are new divides arising? Can individualisation be seen as a basis for cohesion and solidarity or as a factor of atomisation and fragmentation?

What are the forces or ideas that are capable to secure a peaceful and so thriving society, well-integrated and imbued with the spirit of mutual cooperation?

What changes can we reveal through our studies in the region of Eastern and Central Europe? Do they lead to cohesion or fragmentation? Or both but in different aspects? Is it a part of greater change, which one?  Do we face now fundamental contradictions? Or may we talk about illusive cohesion and illusive fragmentation?  And many other questions…

Keynote speakers at the conference were: