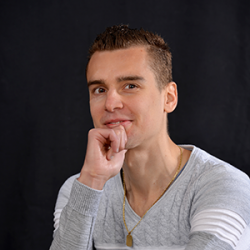 Rok Bratina was born on 6 July 1994 in Šempeter pri Gorici. After finishing the Tolmin Grammar School and after successfully passing the national school-leaving exam, he enrolled in the Cultural history undergraduate study programme at the School of Humanities, Nova Gorica University. He completed the bachelor study in 2016 with diploma thesis entitled. The Forgotten Doctor: The Role of Dr Karel Pečnik with Regard to the Issue of Slovenian Economic Independence and the country’s Integration into International Trade.

In 2017 he got enrolled at the School of Advanced Social Studies, where Rok was attending lectures on Intercultural management. In the first year of his postgraduate studies, he was actively engaged in the project Creative Pathways to Knowledge, resulting in the electronic publication of the book entitled Establishing Starting Points for Tourism Development with Regard to Seniors and Persons with Physical Impairments. In the second year, he won the Student Council election as the representative of the Intercultural Management study programme, and he thus became the Student Council president.

In 2018 he took part in summer university courses offered by the University of Pécs entitled “Identities Under Pressure?” Changing European Union, New Global Order in the Making”. In the same year, he also received an Erasmus scholarship to study at the Maria Curie-Sklodowska University in Lublin, Poland, where he completed part of his study requirements in the 1st semester of the 2nd year. He finished the master’s degree in 2020 with the thesis entitled In Between Europe as a Geostrategic Place: Challenges and Limitations of the Visegrad Group Foreign Policy and the Three Seas Initiative. In the same year he attended the virtual summer school on the on the topic of “Online Personal Development Training”, which was organized by the University of Pécs.