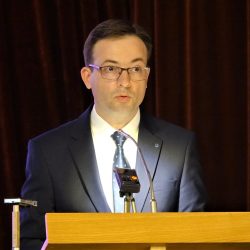 He was a member of the Council of the Ombudsman of the Republic of Slovenia during its first convocation (2018-2019).

In 2016, he completed with distinction his training in Rome in the field of renewed matrimonial canon law and jurisprudence, for which he received a diploma from the Pontifical Tribunal of the Roman Rota. From 2014 to 2020 he was a scholarship holder and a student of the Päpstliche Institut S. Maria dell’Anima in Rome.

He studied theology and philosophy at the Faculty of Theology of the University of Ljubljana – Maribor Unit, where he obtained a Bachelor of Theology degree. He was ordained a priest in 2010.

He holds a Master’s degree (2017) from the Faculty of Canon Law of the Pontifical University of Santa Croce in Rome, where he obtained his PhD in 2020 in the field of State Religious Law and International Human Rights Law with the dissertation: “La fede e diritti dei fedeli ai mezzi di comunicazione sociale in Slovenia – la legislazione e le sfide” (“The Faith and the Rights of the Faithful in the Social Media in Slovenia – Legislation and Challenges”). His doctoral thesis was supervised by Prof. Stefan Mückl, PhD.

His scientific research focuses on the study of legal relations between the state and the Church and other religious communities, the media, the protection of human rights and, within them, in particular religious freedom and canon law.

His scientific and professional articles have been published in several languages in national and international legal and theological journals. He has translated several books and regularly translates international legal documents. He is a guest speaker at thematic meetings, conferences and symposia, both at home and abroad. He is a regular speaker at the All-Slovenian Meeting of Slovenians from Abroad and the World at the National Assembly of the Republic of Slovenia. As a visiting assistant at the Permanent Mission of the Holy See to the United Nations Office and other international organisations in Geneva and as a member of the delegation of the Permanent Mission, he has participated, among other things, in meetings, working groups and informal gatherings of the Office of the United Nations High Commissioner for Human Rights and the Economic and Social Council of the United Nations (Economic Commission for Europe), which has enriched his academic engagement.