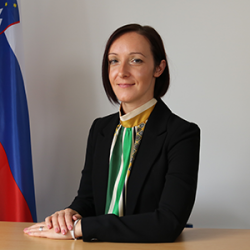 Tamara Besednjak Valič graduated in 2006 and obtained her Master of Arts degree in 2008. She obtained her Ph.D. in Sociology in 2014. She was a visiting professor and guest researcher at Medical University, Faculty of Social Work, Kazan, Russsia (2010), at the University of Bologna, Departimento di Scienze Politiche e Sociali, Bologna, Italy (2012). it was in 2012 when she was a visiting researcher at the University of Nevada, Reno, and University of Las Vegas, Nevada. In 2018 she took over the function of the Project manager (consortium lead) of the project KnowING IPR – Fostering innovation in the Danube Region through Knowledge Engineering and IPR Management (project, partly financed by Danube transnational program). In 2020 she took over the partner project team of Restart_4Danube project – Boosting creative industries in urban regeneration for a stronger Danube region (project, partly financed by Danube transnational program). Since 2019, she holds the position of Vice-dean for research at SASS.